Everyone has heard of this feat, but few can name the hero who accomplished it. By climbing K2 in winter, by solving the "last problem of the Himalayas", 38-year old Nirmal Purja, known as Nims Dai, has made history. However, few people are able to tell their own story.

As we embark on a four-year adventure with Nims Dai, we'll tell you about the unusual destiny of this modern-day hero and how, with our history with the cold, we at Therm-ic found ourselves tied to with this human superman. A team with two objectives: pushing back the limits of the high mountains and inventing the warming solutions of tomorrow...

NIMS DAI, THE SOLDIER OF THE PEAKS

The story begins on a July morning in 1983. At a time when the first rays of the sun are shining on the eternally snow-covered peaks of Dhaulagiri (8167 m). In the shadow of the world's seventh highest peak, Nirmal Purja, soon to be known as "Nims", was born. He became the fourth child in a family of five. The family is modest: his mother is a farmer, his father a soldier. Threatened by floods and landslides, the small tribe moves to the Chitwan district. A rare flat landscape in the country of Nepal, nestled on the side of the Himalayas.

So Nims grew up far from the mountains. Out of sight, out of mind. As a young man, he dreamed of donning army fatigues rather than mountaineering gear. In 2003, at the age of 20, he joined the prestigious Gurkha regiment, Nepalese soldiers serving the British Army since the 19th century, fulfilling his ambition of a military career. Like his father. Like his brothers. Already brilliant at everything he does, in 2009 Nims joins the Special Boat Service, an elite unit of the Royal Navy, and with them racks up multiple operations in war zones, notably in Afghanistan. 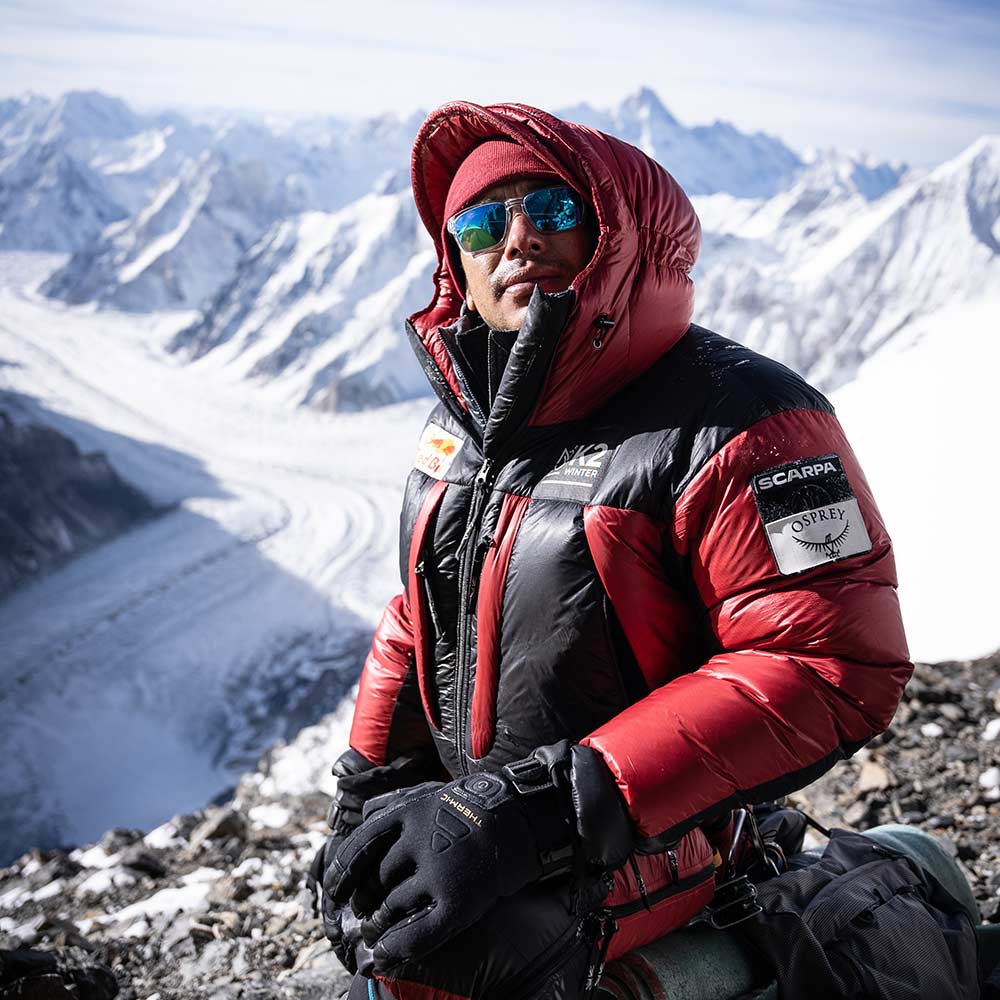 A late initiation to climbing

Unlike other Sherpas who have learned to walk by climbing, Nims was introduced to the high mountains at a very late stage. In 2012 at 31 years old. On a trek to Lobuche (6145 m). It was love at first sight. He discovered a passion, but above all a talent. An extraordinary gift. He acclimatises better than anyone else. When oxygen is scarce, he excels like no other. His comfort zone begins where others' end. At altitude.

In 2019, this man with an iron constitution and a mind of steel left the ranks of the army to join the rope climb of the century, driven by an aspiration: to complete the chain of 14 world summits, all at more than 8000 m, in record time. Not knowing that this is impossible, Nims does it. And with a mischievous wink, he calls his project "Project Possible". Carried by extraordinary natural physiological capacities coupled with unwavering resilience, like a soldier on a mission, Nims sets his sites on beating Korean Kim Chang-Ho's record of 7 years, 10 months and 6 days. He keeps the number 7 but reduces the timescale. The champion no longer speaks in years, he speaks in months.

Nirmal Purja starts his life's work on April 23rd 2019 with the 6 Nepalese climbs. Then, having tackled the 5 Pakistani climbs in the spring, 7 months and 6 days later, on October 29th 2019, at Shishapangma on the Chinese border, he completes it. Man becomes superman. His already unusual destiny becomes legendary. The 12 labours of Hercules are well known, Dims has completed 14. Greek mythology is surpassed by this Nepalese hero.

While in fiction, the postman always rings twice, in science fiction, the brave always strike twice. Nims is one of them, and now he's knocking on the doors of history for a second time. After the record, it's time for a feat. Roped up with Nepal's brightest talents, this former soldier is still a warrior and  on January 16th 2021, at the age of 38, he was to overcome what was considered to be the “last problem” of the Himalayas: a winter ascent of K2, the second-highest summit in the world (8,611 m). And without oxygen.

Finding the keys to the only unsolved equation of modern mountaineering will enter Nims into posterity, giving him his place in the pantheon of the mountains, in a world where legends are usually written after death. 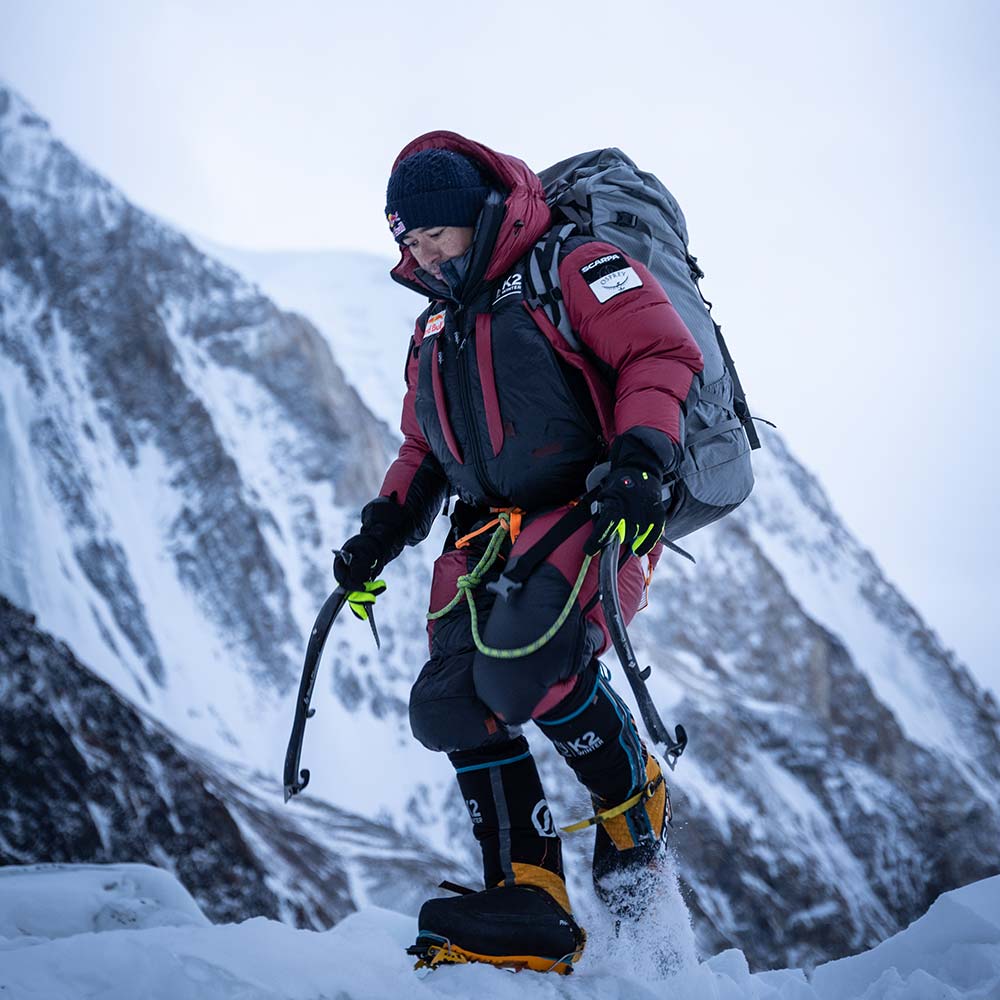 The foundation: a sentinel of the high mountains

A destiny apart, a feat and a record later, Nirmal Purja has become an icon. But an unattainable icon. A human superman. Who practises mountaineering with others, through sharing. Particularly by creating his foundation, whose role is to protect the high mountains and their sentinels, the Sherpas. Nims is leaving footprints. In every sense of the word. A charismatic leader, he leads his team and inspires the world. As always, Nims is invested in a mission. A good soldier of the peaks.

A soldier. In the first chapter of his life. In the British Gurkhas regiments. From 2003 to 2019.

A late discovery. Mountaineering and his extraordinary ability to acclimatise. In 2014. at 31 years old. By climbing Dhaulagiri (8167 m). Then his first Everest climb, in 2016.

An icon. Worldwide. By taking on a mission: pushing back the boundaries of what is possible.

A foundation. To protect the high mountains and their sentinels, the Sherpas.

Want to look behind the scenes of our partnership with Nims? Want to know how important thermoregulation was to his performance? Want to know the equipment and heating solutions we provided for the climber and his team for the K2 ascent? So see you next episode!