Brave the cold and cross Europe on foot

2 adventurers. Adventurers like no others. 2 legs each. 6,000 miles travelled on foot. 300,000m of ascents undertaken. 1 Old Continent crossed. 16 countries visited. 2 whole years spent on the paths. 32 million seconds spent making the most of the present. 780 unforgettable encounters. 150 special invitations into residents' homes. Almost as many rounds of Raki had. 320 unforgettable sunsets. At least as many memorable sunrises. 45 all-nighters. 53 problems avoided...

"Deux Pas Vers l'Autre" or “Two Steps Towards Others" is an adventure, with impressive figures, filled with a lot of courage; boldness especially; and a little madness. But the numbers don't tell the whole story. Because "2 steps towards others" is more than a trip, it is a project. A sports project, symbolic and eco-friendly, which Marie, 31, and Nil, 33, are preparing to mark in a few days by reaching frenetic Istanbul. A positive message filled with hope, which they wrote about step after step. Walking as a way of writing, European civilisation as a common thread.

A small part of the path with the two main characters of this beautiful story, which Therm-ic decided to support. For while they have crossed the borders of Europe, they have above all pushed the boundaries of prejudices and the human body.

A NAME WHICH HAS MEANING

Nil: "The name of our project is a great starting point for explaining our approach. This name was not chosen by accident! For us, "others" has multiple meanings. Firstly, others refers to the unknown, which all too often gives rise to apprehension or even fear. "Others" are all the people we have been able to meet on our way, but also all the unfamiliar places. It is also "the other" part of ourselves, the part which appears when we go out of our comfort zone, the part which shows itself when we test our limits."

Marie: "The idea of "steps" is also important. It reflects this effort, this intention, this willingness to embrace diversity and open ourselves up to discoveries: take a step towards others, take the first step... We are even more motivated because we are taking two steps! Finally, to finish off discussing the name of the project, the number "two" for us is the symbol of sharing. It’s Nil and Marie, but above all, it's all those who are involved in our daily adventures."

A PROJECT, NOT A TRIP!

Marie: "Two Steps Towards Others is a real project, not just a trip. From the outset, we wanted our approach to have meaning. It was never a question of taking two years on sabbatical. So we had to develop this project, give it a common thread, a vision and a message. This is why the preparation was so thorough. 10 months passed between the initial idea and the first step towards others, i.e. our departure from Portugal in 2018.We took our time to develop all the tools which would allow us to publicise our adventure. To share our experiences, to reach as many people as possible, not just an audience who were already aware and active regarding Europe and the environment."

Nil: "We are 31 and 33, respectively. Marie worked in the human resources department of a large company and I was a photographer, mainly in the fashion world. We lived in Paris, an urban environment. Gradually, we started to have a crucial feeling deep down within us, where we thought that's it, it's now or never; we have to grab life!That is how the desire to experience a sporty and human adventure was born."

Nil: "The common thread of the project became very obvious to us. Driven by humanist beliefs and an eco-friendly conscience, we wanted to prove that adventure could also be experienced just two steps from home, on your doorstep..."

Marie: "Exactly! Experience something powerful without having to buy an aeroplane ticket which will cost you an arm and a leg. Our continent already has so much to offer: you don’t have to go to the other side of the world to have a great adventure."

AN ODE TO JOY, AN ANTHEM FOR EUROPE

Marie: "Two Steps Towards Others is a committed project. Physically, because without realising it, it is quite delightful walking 6,000 miles; but above all symbolically, by going off to discover the Europe that we think we know when in reality, we are completely missing it..."

Nil: "During our discoveries, we realised the truth and strength of the concept of "European civilisation". There is common history and a cultural foundation which moulds the identity of our continent. From Portugal to Macedonia, via Albania and Slovenia, we were surprised to see how much people have in common and the similarities in their way of life. With all due respect to the current Eurosceptic wave, Europe is a reality. A reality which is rich in differences, a beautiful and poetic reality of similarities." 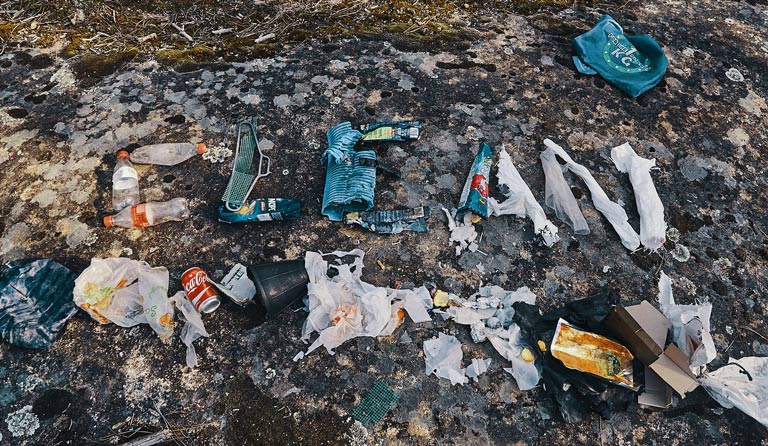 Project "1kg for the planet"

Nil: "In keeping with the humanist and European approach, and backed by this desire to experience adventure just two steps from home, we wanted to move about in the most eco-friendly way, while limiting our carbon footprint as much as possible. Travelling simply and reasonably. Walking as a means of transport therefore became a no-brainer, along with giving ourselves a very small daily budget to live on."

Marie: "In parallel with our adventure, we launched "1 KG for the planet". It is a small bag with a capacity of around 1 kg, which we both wear, and which we fill with the rubbish littering the paths. This is how we play our part, but above all, it helps to raise awareness with the people we have met, who are quite surprised to see us cleaning up the paths. It's true that the more we travel East, the more people live modestly and the more environmental issues disappear. Which, in the end, is completely understandable when your primary concern is survival..." 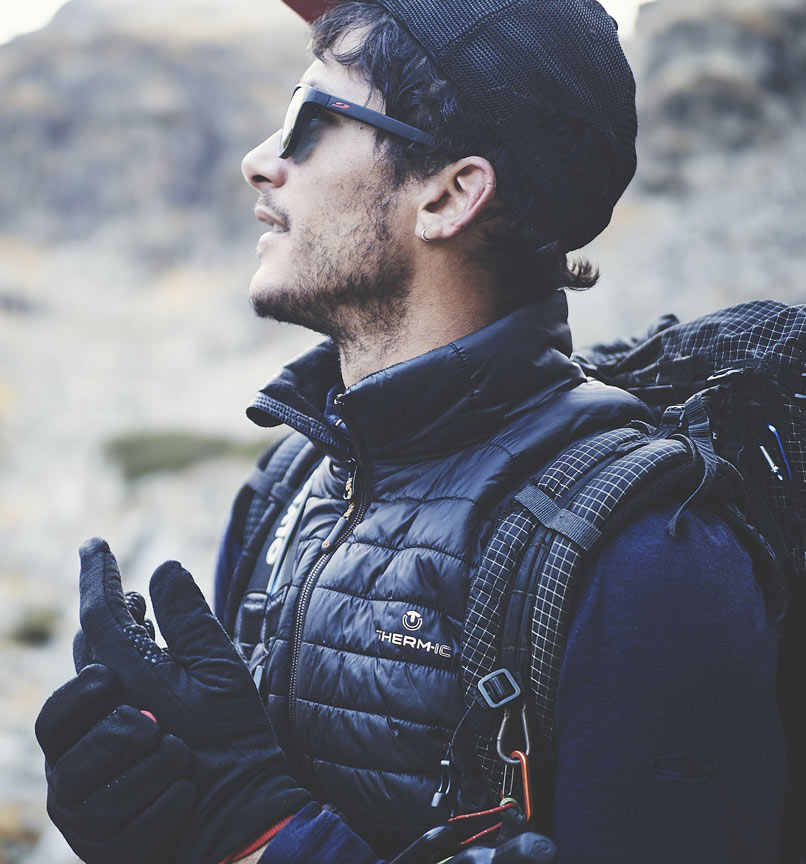 WALKING, FOR THE LOVE OF SPORT BUT ALSO FOR THE GESTURE

Marie: "We are both passionate about the outdoors and the mountains. Crossing Europe was therefore an athletic challenge and a very exciting challenge from a sports perspective. It was a source of enjoyment and a way to surpass ourselves. But we mainly chose to walk because it is fundamentally natural and accessible... It's thanks to walking that tribes met and humanity progressed! »

Nil: "Clearly, walking is not a goal but a means. The ultimate goal is not in athletic performance. It goes beyond the figures, beyond the 6000 miles and 300,000 m ascent. When you arrive in a remote village in Albania and you tell them that you walked for 2 years to get there, they cannot believe it..."

THE SCHOOL OF LIFE

Nil: "Walking for 2 years thus develops mainly 2 skills: patience but also this ability to become aware of what surrounds you, to take the time to enjoy the moment. You feel good because you are in the present, you no longer live solely through the past or the future. When you take 10 minutes to walk 1 km, you enjoy it! »

Marie: "I think we have also developed an appreciation for effort. We have become more resilient: when you have to, you have to. We are more humble too, as we are now fully aware of how small we are in this grand nature. Finally, we learned to say yes, to accept the kindness and hospitality of strangers who give you a lot without expecting anything in return! » 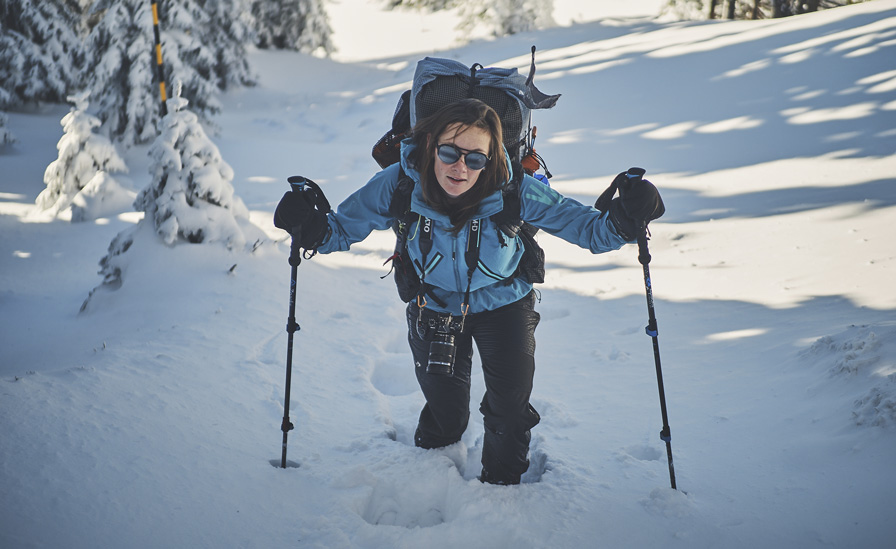 Marie: "I was not really prepared to live through the harsh winter in the mountains for several weeks. I now admire those who are able to do so for years because the conditions are extreme. I suffered a lot from the cold, especially my hands because I have Raynaud syndrome. Clearly, the heated gloves saved my life. Especially since we experienced a particularly long first winter in Spain, with historic snowfall, and a second, very windy winter, where the sea meets the mountains in Serbia and Croatia..."

Nil: "The heat also put us at a big disadvantage. It was even worse than the cold from a purely physical point of view, because of the heatstroke we suffered. The difference is that heat is uncomfortable while the cold is really dangerous. In the mountains, you can get hypothermia which can very quickly put your life at risk."

PROTECTING OURSELVES FROM THE COLD

Marie: "My fever when facing the cold was a real disadvantage during this adventure. Fortunately, my equipment saved me. Be it the heated gloves, which were vital because without your hands you can't do a lot, but also the heated jacket, for maintaining real thermal comfort around the chest. With my chest at a good temperature, my body could focus on improving my blood circulation to the extremities, to warm them up..."

Nil: "My first piece of advice would be to be extremely cautious and humble. While it may be surprising for many people, we have only dealt with a small number of problems during these two years. It's the same with the cold. We need to anticipate it and protect ourselves from it. This involves regularly checking the weather, sometimes eight times a day; Minimizing risk-taking; Always moving our bodies; And finally, protecting ourselves from our worst enemies: the humidity and the cold. Without good equipment, it would have been absolutely impossible to complete this project. "

Discover on video which equipment they use

DISCOVER THEIR ADVENTURE THROUGH THEIR BLOG